If The Missions Impossible, What Can I Do?

Andy looked towards the top of the mountain but couldn’t see it. You see he was only an ant, but he had a job to do, he hoisted his backpack and started crawling… and crawling. It was impossible to see the path through the maze of grass, gravel, fallen leaves and other obstacles but he must get to the top. Every day for as long as he could remember he had been traveling upward, and much of the time the trip was exceedingly difficult. He was lost, Andy knew it; he hadn’t been able to find the trail for days, but knew it must be there somewhere. Surely, if he kept climbing in the right general direction he would get there; after all, he was climbing upwards.
Andy was exhausted. The sun was beating mercilessly on his head, had been for hours now, and the load was getting heavier by the minute. Could things get any worse? They could. Other ants were making their way back, tired and discouraged. 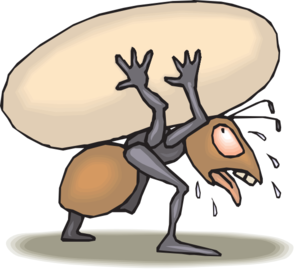 “It’s not enough,” they lamented, “You’ll have to hurry, our little anthills of good deeds are not enough to appease the Creator.
“What about those who have been martyrs: their piles are made up the pain they have suffered, are their offerings more acceptable?”
The only one not too weary to respond shook his head. “All of our offerings look pitiful; I don’t know why we try.”  At that, the other insects hissed angrily and there was such a clamor of protests that Andy crawled away to find shelter under a leaf.
He wondered for a long time what he should do if they toiled all day and long into the night yet their efforts weren’t satisfactory.  At length, he fell asleep.

“Andrew! Andrew!”
Andy stirred and opened his eyes but saw no one. There was a soft glow off to one side so focused on it.
“You are not an ant, but a man,” the melodious voice continued. “The one you call your master has convinced you that you are worthless, of no more significance that a lowly insect, but that is not so.
“Come let me take your burden, and as you share your worries with me, you will find the weight shrinking and you, yourself, will grow into the person you were meant to be.”
Andy turned over and went back to sleep, but in the morning the vision had not left him.
“I don’t know who you are, Sir,” he whispered into the air, but could you come and help me carry my weight?”
Immediately he felt his chest expand as if he could breathe easier and he was able to walk faster.
As the days went by, he found himself sharing more of the load with the unseen Comforter. Other ants looked up at him, puzzled, he was changing, growing, but not in a fearsome way. His face took on more human characteristics, such as kindliness and joy. Every time he helped someone with their troubles, he grew.
One day he shed the mold that was cramping him and was able to gaze into the eyes of his new Master.
Thank you for loving me enough to set me free,” he whispered.
The other ants still clamored around him, belittling him, accusing and distracting him, but he had a new Master.
That made such a difference.

If you want to choose a meaningful book you can keep and reach for time and time again, check out this website:
www.marilynshistoricalnovels.com
Posted by Marilyn Friesen at 06:32 No comments: