I updated this post to make it more clear to those that aren't familiar with the setting.

Her master paced agitatedly just on the outskirts of the crowd, thought better of it, then ducked behind a sycamore tree, hoping to see but not be seen. ‘Why did the scribes and Pharisees have to pick on her of all people? Why couldn’t they have chosen some worthless scum like, like well, Marta, for example. She is old and bent over and no one wants to spend a night with her anymore anyways: might as well put her out on the streets.’
He peered around the tree, why is everyone so quiet? ‘I thought they would be stoning her by now and she would be screaming out and sobbing for mercy…What in the world? He is stooping down writing on the ground? What an odd rabbi.’
He tugged at his jet black beard agitatedly. ‘Something is definitely going on here that is strange.’ He inched a little closer, careful to keep concealed behind the billowing robes of the onlookers.
John and all the rest were edging away from the girl they had dragged in. They knew she committed adultery but now they were slinking off like beaten pups. The master was feeling increasingly uneasy. ‘Does that rabbi know what goes on under cover of darkness? Does he know how sinful these scribes and Pharisees really are?’
Suddenly he felt guilty also and found himself scurrying down the street, heedless of the other men also slinking away, heedless of the stares.
Christ came to seek and to save that which was lost. Reach out to Him. 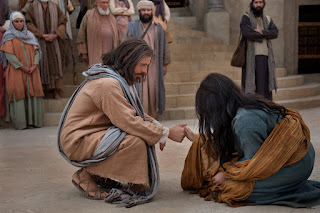 John 8:3-11
The Story Behind the Story
In Jesus' time the scribes and Pharisees  had a lot of clout. They were the religious leaders and forced the people to adhere to the law, their laws in the tiniest of details.

They liked to stand on street corners loudly praying, but in their hearts where no one could see, but Jesus, they were proud and cruel, and sinners like everyone else. It rankled them that Jesus, who was kind and merciful spoke so strongly against them. This is just one incident where they tried to trap Jesus into breaking a law that would get Him into serious trouble, but since He know their hearts, they were the ones that turned away feeling guilty.
Posted by Marilyn Friesen at 06:43 No comments: