Take It All if You Must

As President Davids held the dead infant in his arms, unshed tears burned his eyes. He was too heartsick to find relief through weeping. Fleetingly he wished for the blessed fellowship he had once known with his Savior and dearest friend, but the thought didn’t last. I am too far gone to be ever restored into his favor, he sadly admitted.

The last two years had been fraught with agony. Something he rarely admitted, was been offended at God for taking his first wife, darling Anita.  Since praying wasn’t easy in that state of mind, he got to spending his spare time doing other things, going to movies, elite bars,  prestigious churches, anywhere where he might find someone who would remind him of Anita, not that he realized it.

He found someone, alright, and there was a strong mutual attraction right from “Hello, my name is…and you are,”

“Of course I know who you are, “Bethany giggled. “Everyone knows the President!"

They laughed companionably together, but she did have a way of making it obvious that there was a ring on her finger.  They talked about her absentee husband, and Davids could sense her dismay that he had been unable to attend yet another social function.  It didn’t take long to note that her husband, Mr. Douglas, was a conscientious man who put work before leisure; one whose sole mission in life was to eradicate all the drug trade in the capital city.

President Davids drew his thoughts back to the present and handed the baby to his weeping wife, who, as usual refused to look at him. 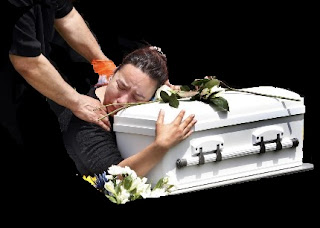 The gossip mongers had had a hey-day smearing rumors, and sometimes even the truth of his sins over the front pages of their cheap magazines. He bitterly admitted that he deserved the world’s scorn. Oh that Bethany’s beautiful name hadn’t been coupled with his in their disgrace.
.
Oh, if only I hadn’t forsaken God. Oh, if only I wouldn’t have wooed Bethany, knowing full well how vulnerable she was in her lonely estate. Oh, if only I wouldn’t have sentenced a noble man to sure death by suggesting that he be involved in the sting that caused him to be murdered. I knew, I knew how the drug lords recognized and hated him. I knew…Oh why go on.

He sent another covert look his wife’s way.  At least she agreed to marry him after Jim’s funeral, but of course not nearly soon enough to hide the ugly truth. The baby came far too soon to have been legitimately his.

The agony was too heavy to bear. A broken man, President Davids collapsed to his knees beside the open grave while the mourners looked on.

“Have mercy on me, oh God”, He groaned, as the tears streamed down his cheeks. “I am not worthy of the least of thy mercies. Take the presidency from me, let the world mock and scorn, let even Bethany reject me, but, please, please forgive me. Against thee my Lord and Savior have I sinned. In thy mercy thou hast taken our darling son although it is so hard to bear. He would have never received the respect and recognition he deserves because of our sins.  All I ask is to be restored to thy favor. If I must be stripped of fame and fortune, so be it.  You are all I I long for."

As he buried his face in his hands, he was unaware of the softening hearts all around him. He was aware, however, when Bethany knelt beside him and shared his grief and tears of repentance.

Based on the Biblical story of King David and Bathsheba.
Posted by Marilyn Friesen at 13:15 No comments: