Tumbling Into a Valley

Now where shall I start this article? I have spent three glorious weeks travelling and it has been truly a mountaintop experience, but now  have tumbled down into the valley. See that little old lady with a cane? Well that 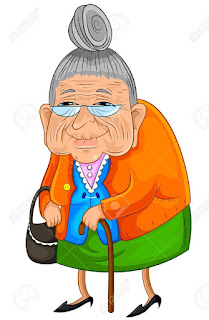 feels like me. All that driving in a car really crippled me up and I still can’t walk—change that to limp—without discomfort. I told my hubby last night that I felt imprisoned in my own body. Okay, that’s the down side of my experience, but there is a definite UP side. We stopped to see relatives in various places as far flung from each other as Edmonton, Alberta and way down to Oklahoma. We did go further than that though: Mississippi was our goal.

Do you know what people have in common? A caring attitude.
When we reached Stephen’s sister is Kansas, I pretended to walk normally but didn’t deceive anyone. It wasn’t long before they were hovering over me like I was a beautiful bird with a broken wing.  Did that compassion soon stop? Nope. Because of generous, concerned loved ones, I ended up seeing chiropractors not once but four times before we arrived back home, and once since.
I admit being a little leery of having my bones manipulated, but hey, when you are desperate enough, you’ll do anything right?  To my surprise chiropractic methods have really soared over the last thirty years, and I was introduced to something called an Activator which really helped.  Believe it or not, anyone could have seen the improvement in my walk if there had been a before and after video taken.
No, it wasn’t a magic cure-all but hey, it took years to get into this condition which was caused mainly by an ancient injury, but at least I see light at the top of the valley I have tumbled into.
Oh, by the way, when I started rambling I didn’t really know which way this article was going, but there is one thing I must share with you.


Medical problems in the states aren’t something we Canadians look forward to having, but do you know what? Four of those treatments, plus ointment, plus pills and plus a couple of informative books were all provided anonymously free of charge. Any wonder why I’m feeling a bit teary-eyed?
Posted by Marilyn Friesen at 04:27 No comments: