Have you ever been reluctant to do something good because you were indulging in something even better? The most sacred time of the day by far is in the early morning and late at night when everyone else is possibly sleeping. Sweet communion with the Heavenly Father is...matchless.

But-- and nay, I will not even sigh-- before dawn's early light God was inviting me to share this joy, this beauty with others like you. He had whispered the suggestion yesterday and I was prayerfully wondering how I could do justice to such a lovely topic as communion with the Father.

But do you know what? He introduced a new twist: the Bible opened to a verse about Hezekiah who was one of the good kings of Israel from the long ago Bible Times. Maybe that doesn't seem so significant but it is, it really, really is. Do you know why? It's because his Dad, King Ahaz was a nasty old man, pardon me for saying so. He sure found a lot of ways to do evil but the one that makes me cringe the most is that he 'burned his children in the fire, after the abominations of the heathen,"  (2nd Chronicles 28 part of verse three.) It's a good thing he spared Hezekiah, but we'll get to that later.  Because Ahaz was a man of power and great influence, many people suffered and even died as a result of his sins.

By now you must be convinced that I have Alzheimer's or something and wandered completely off the topic but I haven't. I wanted to lay this background so you would get a better idea why the verse I am coming to is so remarkable. It's referring to Hezekiah after he replaced his father as king.

OK, sit up straight, and listen: 'For he clave (clung,) to the Lord and departed not from following Him, but kept His commandments, which the Lord commanded Moses.' (2nd Kings 18:6)

That's the son of an evil man that we are talking about, but fortunately, he had a mother who loved the Lord, and so I am pretty sure both of them had learned how precious it is to pray, commune, fellowship, with the Lord God. That daily contact is vital. They were surrounded by evil, and maybe you are too, but get in touch with the Heavenly Father and cling to Him like Hezekiah did. Oh my, it is so worth it! 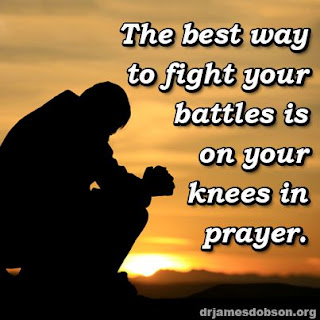 Thanks to Dr. James Dobson for this wonderful image.
Posted by Marilyn Friesen at 06:39 No comments:

Just a Little Honey, Why Not?

The second part of a story found in 1 Samuel 14
Part of the Glass Castle Series.
Jonathan was enthused about the battle, but he was getting tired, really tired. He noticed that his fellow comrades were also wearying, although they were valiantly pursuing the enemy. He had been rooting out ‘demons of darkness’ in a thick woods and paused for a moment to catch his breath.
“Ah, honey!”
In their haste that morning they had forgotten to take time for their devotions, time to receive the special food from the King that would help them to battle on tirelessly. Seeing that honey dripping onto the ground caused Jonathan to rejoice.
“Surely the King of Love is with us,” he cried, “and has blessed us with nourishment even though we had been too hasty to take time to eat this morning.”
In his eagerness to taste the delectable treat he hadn’t noticed that all the men around him had fallen silent and were watching him.
“Know you not that the Captain specifically asked us not to waste time eating?” someone ventured.
“What? What kind of logic is that?”
“He was so confident of our success that he told us it wouldn’t be necessary.”
Jonathan looked slowly around him. “But look how much better I feel. I am refreshed. Think how much better all of you would feel if you had taken a moment to feed on the manna from Heaven, or even just a little honey.”
He saw that some of them were beginning to scuff the leaves under foot so said briskly. “But all is not lost, men. We are still in the army of the King, so let’s go to it with renewed vigor now that we have rested a bit.”
The fight was renewed, and many of the enemy was routed, but Jonathan knew secretly that the victory would have been greater if they would have stopped for nourishment. 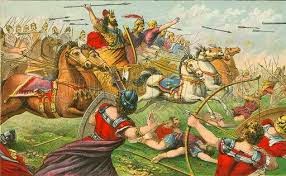 The day waxed and waned and although there were many victories, disaster befell them. Some of the weaker soldiers became contaminated by the enemy’s food, and even their bold, impetuous Captain saw that something had to be done or the triumph of the day would turn to tragedy.


The King of Love would have wanted them to take time for devotions, I mean heavenly manna or even a bit of honey, but since they listened to a different voice they weren't truly prepared for battle.

Posted by Marilyn Friesen at 12:45 No comments: