“He’s such a no-it-all!”
“He’s always thought he was better than us.”
As Jesus walked towards His childhood home he had been hungry, enthused to lay aside his tools for the day and enjoy a good supper. The aromas had assailed him as he strode towards the house. Now his appetite left Him. Jesus instinctively knew they were talking about him again.
Jesus thought briefly of turning back and not eating, but no, that would be cowardly, and His mother would get upset.
With a barely suppressed sigh, he entered the cottage.
James glowered at Him. “Well, you took long enough. The lentils are getting cold, why do we always have to wait for you?”
“Ya,” Simon chimed in, “You think you are so important that we all can wait.”
Jesus could have told them that wizened, old Aaron ben Yosef, who was getting forgetful, had wandered away from his home and was frightened. Jesus had taken him back to his son’s place even though it was across town.  It had taken much longer than expected because Aaron was distracted so easily.
Why tell them? They weren’t interested anyway.
Even Mary looked unhappy as she thumped His bowl of lentil soup on the table in front of Him.
It was his duty as the eldest Son to lead n prayer now that their father had passed on.
He paused, trying to corral his troubled thoughts.
Simon's head jerked up. “Well?”
Jesus smiled gently at his brothers then turned to the next in age.
“James, why don’t you pray today?”
James’ eyes widened then he quickly mumbled a, a something, they assumed it was a prayer before reaching across the table for the bread.
Only his little sister, Lydia, looked at him with loving concern. Jesus knew she still adored him, but when the meal was over, he didn’t have the heart to play with her when the others were so unhappy with him.

Instead of sitting in the house after the meal and reading the Torah as Jesus had originally planned, Jesus took a long walk through the arid countryside and poured out his heart to His Heavenly Father.
biblehub.com/john/7-5.htm
biblehub.com/hebrews/4-15.htm 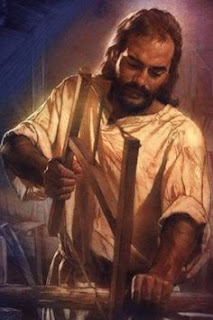 Posted by Marilyn Friesen at 08:53