Sherwin peered down from the balcony of the colonial style mansion. What in the world is Grand pop doing? 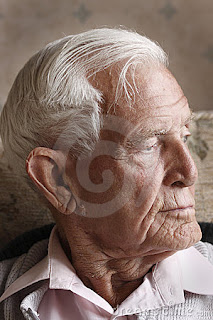 He always looked forward to visiting his grandparents. Sure, Granddad was a crusty old soul, but Grammie more than made up for it by being jolly and well, grand-motherly. Sherwin shaded his eyes against the glare of the hot, Mississippian sun and tried to figure out what the old man was up to. He seemed to be using a cane. Sherwin knew the old man wouldn't want to be caught dead with a cane in his hands so it couldn't be that and besides he seemed to be sweeping back and forth with that odd looking stick.
Sherwin knew there was no point in hollering because the old man was too far away, and besides he (sometimes) seemed to be stone deaf. So, forgetting the sweltering heat, Sherwin scrambled down and was soon heading kitty corner across the field to ask a few questions.
“What are you doing, Grand pop?”
Mr. Henry straightened his creaky old back and almost leaned on the strange looking stick, but decided not to.
“Back when my great grandpa was a boy there used to be a store at these crossroads. It burned down years ago but I'm suspecting there might be ancient coins burned in the dirt here.”
Sherwin’s brow furrowed. Why would there be a store out in the middle of the boondocks?
“Was there a town, here?”
“No.” Grand pop seemed reluctant to say more.

Read more »
Posted by Marilyn Friesen at 06:02 No comments: