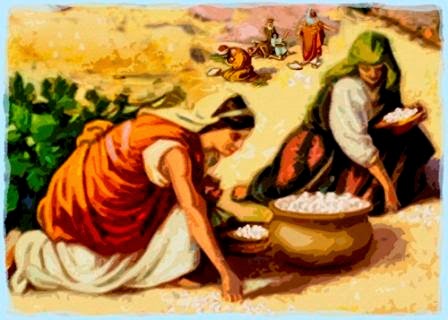 “Isn’t it ridiculous picking up this silly white stuff day after day?”
“Shh, you had better be careful what you say. God sent it. Would you rather be eating… eating, well who knows what and dying of thirst like our forefathers practically did before Moses struck the Rock?”
“Yes,” a younger voice piped up, “And he sure got in trouble for doing that. Now he won’t be able to go into the Promised Land.”
“Promised Land,” the first one scoffed. “We’ve been wandering in this desert for nearly twenty years already. Why, you and I and everyone else our age was born after they were shut out of that so called Promised Land.” Dinah huffed as she swung a big basket over her arm. “I’m getting a weeks’ supply of that manna. I’m sick and tired of gathering it every single day just because Mama is so sickly all the time.”
“Go ahead,” her friend Lilka scoffed, “You know what Moses warned us would happen. I’ve heard rumors it has already  in some other areas of ‘tent city’.
Twenty four hours passed. Same time same station as it were, the only difference was facial expressions, mostly, and of course the conversation had changed.
Dinah looked so sullen, or was it subdued, that Lilka and Josiah didn’t dare say a word to her.  They had observed her, from a distance mind you, trying to dispose of a whole week’s supply of moldy wormy manna and trying unsuccessfully not to throw up over the whole repulsive mess. 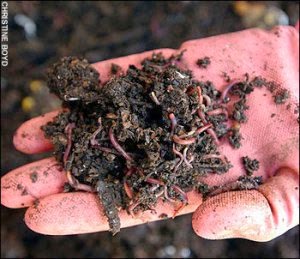 Dinah learned her lesson, have we to? God simply does not want us to gather too many worries for example. Sufficient unto the day is the evil thereof.

Some might wonder if I sit down at the beginning of every month and map out the topics I will be writing about for the next thirty days.
“ Nope, not a chance.”
“ Well, for the next week then?”


“ Uh uh.  Why bother, I want my manna (which comes from Heaven) fresh and new.” Give us our day our daily bread.
Posted by Marilyn Friesen at 06:04 No comments: