I made myself a new friend. Ah me, what a dream, I haven’t even met her! Let’s start again; I wish I could have her for a dear friend. Everyone applauds her for her sewing ability and no doubt, it was wonderful, but I don’t think that is the reason people cried when she died suddenly. Would you weep just because someone who made you a garment passed away? I think not. Would you if you were desperately poor, and it was the only decent thing you had to wear? I doubt it, after all, a brand new, possibly heavy, homespun garment would last quite a while, and even if it didn’t, that isn’t what you would remember her by.
Really? So what was? Dorcas was one special woman. Her heart was overflowing with love. These were poverty-stricken widows and others to whom she ministered. Widows, get that? Wives’ and mothers whose husbands’, the father to their children, had died, possibly drowned at sea because Joppa was a seacoast town. They were heartbroken, lonesome and she cared.
Sure, they showed anyone interested the tangible evidence of how kind she was to them, but that wasn’t the most important part. 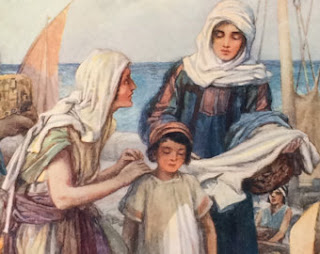 Here was someone that loved them, shared their suffering and when she died they couldn’t bear to let her go.

I guess Peter couldn’t either, because when he was summoned from a nearby town, he dropped everything he was doing, and came.
It was a tremendous miracle when Dorcas rose from the dead and many became Christians because of it, but let’s not remember her for doing acts of mercy, but for showing compassion.


Hey, Dorcas, may I get to know you in Heaven and be your friend, there?
Posted by Marilyn Friesen at 05:48 No comments: