Can eight weeks of suffering disappear in one night? Nay, make that eight years, or even two-thirds of a lifetime.

Physically I was never like 'other girls' I was weaker, frailer, and had less stamina. This showed up even as a child, but it wasn't until I was in my twenties, I believe before the dizzy spells really kicked in. I'm telling you our family doctor tried, he really tried to find the solution for many years but nothing helped.

But the years sped on with migraines, sinus headaches, and the nausea and vertigo that increased intolerably under the slightest stress.

Was I miserable? Yes: and no. God was there. And anywhere with God is a haven of comfort.

My husband had seen me suffering all these years and it became so severe that social settings were becoming intolerable. He got the idea to ask one of the pastor's in our local congregation if they could have a healing prayer for me.  They were open to the idea.

Saturday evening, April 23 has become a holy day in my heart and memories. We are a large congregation so there are two ministers (pastors) and two deacons. We met for a time of Bible reading, fellowship and praying. It was a time of sweet communion as we shared our hearts, confessing our faults one to another. Although the discomfort in my head was so bad at this time, I was willing to go through with it, to see what God could or would do.

We knelt beside our chairs with my dear friend; one of the pastor's wife's, supporting me while her husband anointed my head with oil, and prayed.

Immediately I felt a burning, but not uncomfortable feeling in the center of my forehead which lasted for about a half an hour. Was the dizziness gone? Yes. Was I able to do things what 'normal' people do after that? Absolutely.

I felt like I was treading on Holy Ground, and today which is Tuesday, the wonder, the hallowed feeling is still with me. He Touched Me. The loving Heavenly Father deemed me worthy of a gentle touch of healing and I feel like tiptoeing in His Presence, He was/ is so close. 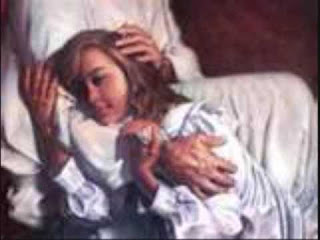 Posted by Marilyn Friesen at 05:38